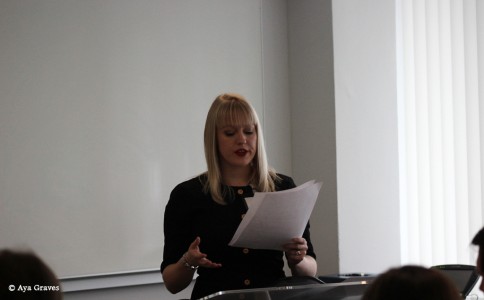 Presenting at the ‘Asylums, Pathologies and the Themes of Madness’ Symposium – University of Stirling – January 2016

The Water Has Memory: Expanding the Mythosphere of Oz in Gregory Maguire’s The Wicked Years, GIFCON, University of Glasgow – May 2019

‘I know You: Maleficient and the Reimagined Wicked Queen’, as part of panel proposal Beautiful Wickedness: Fairytale Queens and the Gothic, Reimagining the Gothic,  University of Sheffield – May 2019

Agony and Ecstasy: Ballet and the Gothic, Reimagining the Gothic,  University of Sheffield – October 2018

‘“Who frowned me this face?”: Dopplegangers in and out of time in Doctor Who’, Temporal Discombobulations – University of Surrey – August 2016

“I know all the stories … but I still want to hear the world tell them the way only it can tell them”: Reimagining Russian folklore in Deathless and Egg and Spoon”, Global Fantastika – University of Lancaster –  July 2016

‘Will the real monster please stand up?: Fear in the age of the sparkly vampire’, Reimagining the Gothic: Monsters and Monstrosities – University of Sheffield – May 2016

Wicked Girls: Oz as Asylum/Asylum as Oz, as part of panel proposal Madness, Identity, and Horror in the Asylum – Asylums, Pathologies and the Themes of Madness: Patrick McGrath and his Gothic Contemporaries – University of Stirling – January 2016

‘There’s no Place like Oz: Oz Reimagined On Screen and Off’, Locating Fantastika: An Interdisciplinary Conference – University of Lancaster – July 2015

Transitioning Bodies and Changeling Children in Gregory Maguire’s Confessions of an Ugly Stepsister and Out of Oz, Being Non/Human: Bodily Borders Conference – Queen Mary, University of London – June 2015

‘Through the Looking Glass: Adaptation as Mirror in Contemporary Fairy Tales’
Wonderlands Conference – University of Chichester – May 2015

‘New Wine in Old Bottles: Creating New Myth from Old in Gregory Maguire’s The Wicked Years’
The Wizard of Oz and the Cultural Imagination – University of Brighton – November 2014

‘“Now what are we going to do about Dorothy?”: The Judgement of Dorothy in Gregory Maguire’s The Wicked Years Series’
Returning to Oz: The Afterlife of Dorothy Hic Dragones – Manchester – February 2013

‘“No One Mourns the Wicked”: On the Nature of Evil and Monstrosity in Gregory Maguire’s The Wicked Years Series’, 10th Global Monsters and the Monstrous Conference: Myths and Metaphors of Enduring Evil – Mansfield College, Oxford – September 2012

Invited speaker on Beauty Of The Beast: Monsters and Why We Love Them, Nine Worlds Geekfest – London – August 2016

Invited speaker on How to Cosplay on a Budget, Nine Worlds Geekfest – London – August 2016

“The eye is always caught by light, but shadows have more to say”: Reflections of the Non/Human in Gregory Maguire’s Mirror Mirror
Being Non/Human Research Group – Kings College London – May 2014

‘Adapting Narratives: Gregory Maguire’s Wicked’  for the HNC Professional Writing Skills module on ‘Narrative in Fiction and Film’, May 2010